Alexander, the Great (356 - 323 BC) had a wonderful and gorgeous horse, Bucephalus, which carried Alexander through several battles to create the mighty Greek empire. There is a legend about the taming of Bucephalus as described by Plutarch, the Greek historian and biographer.

When Alexander was only twelve years old, Philoneicus, a Thessalian brought a wild horse before King Philip II of Macedon, the father of Alexander. He wanted to sell it to King Philip. But the horse was uncontrollable and unstable. No one could tame it.
Alexander observed the peculiar behaviour of the horse and noted that it was behaving abnormally as it was scared of its own shadow. Every time it saw its shadow, it got frightened and became uncontrollable. Alexander volunteered to tame it. King Philip promised to buy the horse and gift it to Alexander if he could ride it.
Alexander knew that it was shying away from its own shadow. So he stroked it gently and slowly turned its face towards the sun and led it forward, so that its shadow was behind it and it could not see its shadow. The horse became tame and Alexander easily mounted on it and rode happily. He named it Bucephalus and used it in all his conquests till its death.
Our shadow becomes visible to us only when we turn away from the source of light. The shadow grows in size as we move away from the light.
The shadow of our sins haunts us as we turn away from Jesus, the light of the world. As we move away from Him, the shadow of sin appears to grow to alarming proportions and frighten us. But if we turn towards our Saviour with repentance, our sins cannot scare us. He sacrificed His life and redeemed us from sin and the influence of Satan. He will forgive our sins.
The saintly sages of ancient India used to recite the Vedic prayer:
“ASATO MA SAD GAMAYA,
THAMASO MA JYOTHIR GAMAYA,
MRITHYOR MA AMRITHAM GAMAYA.”
{Brihadaranyaka Upanishad 1.3.28}.
This popular prayer of Hindus in the Sanskrit language can be translated as:
“Lead us from Untruth to Truth,
Lead us from Darkness to Light
Lead us from Death to Immortality.”
Jesus revealed to us, “I am the way, the truth, and the life” {John 14:6}.
“I am the light of the world,” He said. “Whoever follows me will have the light of life and will never walk in darkness” {John 8:12}.
“I have come into the world as light, so that everyone who believes in me should not remain in the darkness” {John 12: 46}.
St. John teaches us, “God is light and there is no darkness at all in Him” {1 John 1: 5}. Isaiah foretold His incarnation and mission, “The people who walked in darkness have seen a great light. They lived in a land of shadows, but now light is shining on them” {Isaiah 9: 2}.
“The Word was the source of life, and this life brought light to mankind.The light shines in the darkness, and the darkness has never put it out” {John 1:4,5}.
God said, “I, the Lord will be your eternal light; The light of my glory will shine on you” {Isaiah 60: 19}.
Let us turn towards Jesus, our eternal Light, who removes the shadow of sin from our lives. 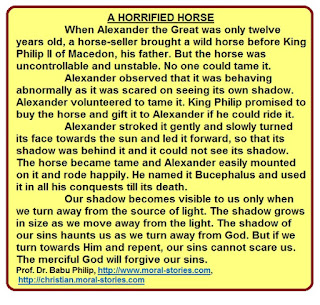