Saint (Mother) Teresa (1910-1997), while serving as a nun and teacher in the Loreto order, received God’s special call to serve Him among the poorest of the poor. Thus she founded the order of the ‘Missionaries of Charity’ in 1950 in the filthy slums of Kolkata in India.

One day, she found a poor, dying woman in a heap of rubbish. Her body was bitten by maggots, ants and rats. The mother carried her to a safe place, cleaned her and gave all possible medical attention and loving care. Her life could not be saved, but she died with a sweet smile on her face. She died with dignity. The mother remained close to her till her death. This incident gave her the inspiration to start a home for the dying, where people could die with dignity, receiving tender care and affectionate attention till the last moment of life. In 1952, the Mother opened the ‘Nirmal Hriday’ meaning ‘pure heart’ as a home for the dying. Dying destitute people brought to the Nirmal Hiday received the religious rites of their own faith before their death. The Christians received the Last Rites of Holy Liturgy, the Hindus received the Holy water from the sacred river, Ganges (Ganga) and the Muslims could hear the recital of the Holy Quran while approaching death. Thus they could die in faith and dignity, with the feeling that they are wanted and loved.
The home was meant to gift a beautiful death to people who lived like animals; with the grace of angels, with the feeling that they are loved and wanted.
She came to be known as ‘the Saint of the Gutters’. She spent all the money received as gifts, donations and awards for the care of the poor, sick and destitute people. She accepted the Nobel Peace Prize in 1979 “in the name of the unwanted, unloved and uncared people.”
The mission of the Missionaries of Charity, according to her, is to “care for the hungry, the naked, the homeless, the crippled, the blind, the lepers, all those people who feel unwanted, unloved, uncared for throughout society, people that have become a burden to the society and are shunned by everyone.”
To persons who volunteered to join her acts of charity, she said, “What I can do, you cannot. What you can do, I cannot. But together we can do something beautiful for God.”
Her words reveal her vision about her mission, “We are all pencils in the hand of God. In this life we cannot do great things. We can only do small things with great love."
She had a clear view about religion and conversion. She said, “There is only one God and He is God to all; therefore it is important that everyone is seen as equal before God. I have always said we should help a Hindu become a better Hindu, a Muslim become a better Muslim, a Catholic become a better Catholic.”
In her view, “The most terrible poverty is loneliness and the feeling of being unloved.” She said, 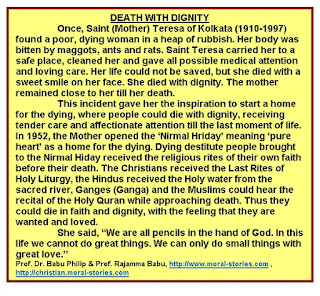 "Kind words can be short and easy to speak, but their echoes are truly endless. I see God in every human being. When I wash the lepers’ wounds, I feel I am nursing the Lord Himself. Is it not a beautiful experience?”