George Bernard Shaw (1856-1950), the renowned Irish dramatist and prolific writer was awarded the Nobel Prize for literature in 1925. When he was at the peak of his career, a very beautiful and famous actress approached him with a proposal for their marriage. She suggested that they would be very lucky if they got a child with his brains and her beauty. Shaw, who was not particularly handsome, humorously asked her to consider the ridiculous situation of the child getting her brains and his beauty!

An Indian girl child got the idea from her father that good children are born to parents who pray to God for that gift. She prayed for years to get a good child. She gave birth to the greatest ascetic and philosopher of , Swami Vivekananda.
There is a view that Cain was conceived in sin while Abel was conceived after the repentance of Adam and Eve. This was proposed to explain the contradictory behaviour of the two brothers.
Mother Teresa said that children are to be conceived in the mind long before conception in the womb. Hence even men can conceive children- in their mind. An adopted child later defined adoption as ‘being born in your mother’s mind though not conceived in her womb’.
It is feared that children born to aged mothers may be defective. But the Bible lists mothers who conceived in their old age after long years of fervent prayer and delivered outstanding children. Abraham and Sarah, Hanna and Elkanah, St. Joachim and St. Anne and St. Zechariah and St. Elizabeth were parents whose prayers were answered by God and were blessed with exceptionally gifted children in their old age. Children are the lovely and living gifts of our loving God.
A saintly woman was praying to God for the gift of an effective remedy for the deadly disease, AIDS. In a vision she was told that God had sent the information for making the medicine through the brain of a gifted child, but the child was ruthlessly aborted by his cruel parents.
Life is a great gift of God and man has no right to end it –by suicide or homicide. Abortion is early infanticide and euthanasia is another form of brutal murder. In these evil acts the victim is helpless and unable even to react.
Jesus taught his disciples, “And whoever welcomes in my name one such child as this, welcomes me” {Matthew 18: 5}. 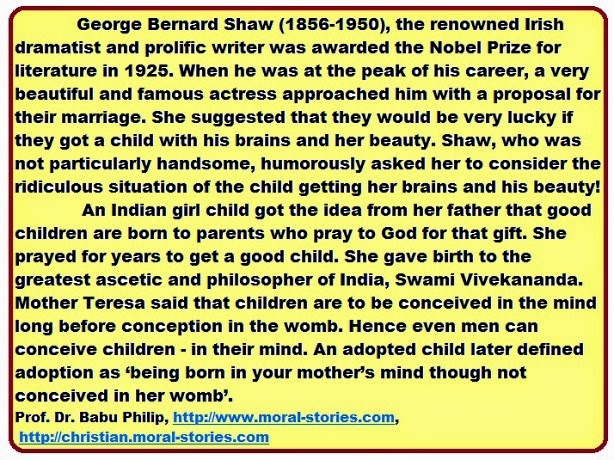 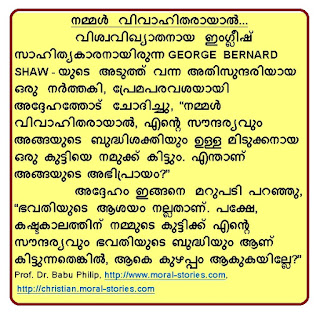