A smart and active child was playing with a battery-operated toy car. It fell from his hands and stopped working. He took it to his father who was an engineer.

His father opened the car with a screwdriver to examine the trouble. The curious child was watching carefully. Suddenly he cried out in joy, “Daddy, I have found out why it doesn’t work.” He put his tiny fingers into the car’s front seat and took out a dead fly. He declared aloud, “How can it work when the driver is dead?”
Actually, it was a wrong diagnosis. The father had found that the cells had been displaced by the fall. But he enjoyed the child’s innocent comment. Later he repaired it and returned it to the child who resumed his play.
Whenever we encounter a failure or disaster in our life or career, we assign the responsibility to some other person. In some cases, the actual fault may be our own. But we attribute it to others or to ‘ill-fate’.
Failures and negative incidents in life should be seen as part of God’s plans for our ultimate welfare.
God has definite and specific plans about every man.
“The Lord says…I alone know the plans I have for you, plans to bring you prosperity and not disaster, plans to bring about the future you hope for” {Jeremiah 29: 11}. 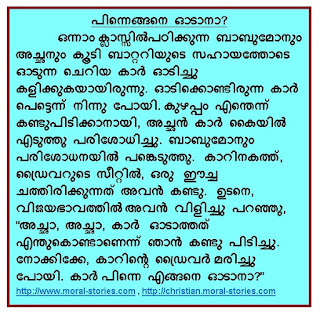