The Gospel of St. John narrates the words of Jesus from the Cross to His loving Mother and His dear disciple (St. John), who were standing close to the Cross. He said to His Mother, "He is your son" {John 19:26}. Then He said to St. John, "She is your mother" {John 19: 27}.

Thus Jesus proclaimed His last will and testament. By giving a son to his beloved mother, he was entrusting the whole humanity to her tender maternal care and intercession. By gifting his dear disciple with a mother, He was giving a mother to the human race. St. Mary was with Jesus from the crib to the Cross. She co-operated in His redemptive mission from the womb to the tomb and guided the Church in its infancy. By these words He assures a shelter and support to His mother and gifts a Mother to His Church. By the words of Jesus from the Cross, Mary is anointed as the Mother of His Church, the mystical body of Christ, which He redeemed.

The words to His mother are regarded as her second Annunciation by God - calling her to become the spiritual mother of mankind. She thus became the universal mother, the new Eve. Jesus was her only son by the flesh. But the whole human race became her spiritual children by this anointing at the Cross. Jesus was giving us His mother, to be our Mother. Each one of us was represented by St. John at Calvary.

Traditionally it is believed that St. Mary consoled St. Peter who was in tears following his denial of Jesus. Her words transformed him and filled him with correct repentance, enabling him to take up the responsibility of leading the young Church. Her presence at the Pentecost testifies her special role in strengthening the early Church.

Following the words of Jesus, "the disciple took her to live in his home" {John 19: 27}. Let us follow the disciple by bringing her into our home and life and venerating her blessed name in the Holy Rosary: Blessed are you among women, and blessed is the fruit of your womb, Jesus. Holy Mary, Mother of God, pray for us sinners, now and at the hour of our death, Amen. 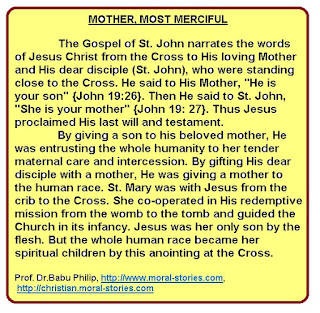