Once upon a time, following a shipwreck, one of the crew managed to hold on to a wooden remnant of the ship and was washed ashore a desolate island. He stayed there for many months expecting a rescue by some other ship. He built a tent and started a new way of life. Most of the time he reached the beach and looked for signs of help from an approaching ship. He prayed fervently but his prayers were not answered for a long period. One day, feeling much depressed and disgusted, he stood at the beach, as usual, inspecting the horizon, expecting the appearance of a ship as an answer to his prayers. Suddenly, to his horror, he found that his tent was on fire. He rushed to the scene but was helpless. He cursed God and his fate, as his last possessions were lost in the fire. He returned to the beach, ready to commit suicide in the ocean. As he entered the water, he could see the flag of a distant ship. A boat was fast approaching him. The sailors arrived and rescued him. Back in the ship, he asked the captain how they could learn about his plight. The captain said, "We saw the fire and the smoke rising from that island. We sent the boat expecting some one there."

It was only then that he realized that God's ways are mysterious. He felt sorry for cursing God for letting his only possessions catch fire. He realized that the fire was God's signal to the sailors in a distant ship. He learned to trust His lasting love.
"I alone know the plans I have for you, plans to bring you prosperity and not disaster, plans to bring about the future you hope for." {Jeremiah 29:11} 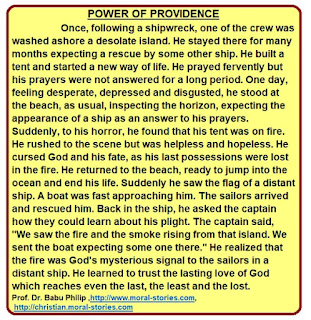