A pilgrim returned from a tour of the Holy Lands. At the airport, the officials asked him if he had any liquor with him. He denied. They inspected his baggage and seized a bottle. "What is in it?" they asked. "It is a bottle of holy water from Cana, where Jesus did his first miracle", he replied. The officials examined it and questioned, "But it is wine. Why did you lie?" The pilgrim shouted, "Oh, Jesus, You have done it again! What a wonder! Praise the Lord!"

Alcoholism is prevalent even among Christians. Sacraments of baptism, First Holy Communion and matrimony are often celebrated with alcohol.
The Jews of Jesus' times used wine as a custom in moderation. They never drank it to the level of intoxication. At low levels alcohol may be a drug or a food but at higher levels it is definitely a poison, which distorts the personality, destroys domestic life and initiates sinful anti-social activities. Alcohol appears to dissolve problems and worries for a while, but they later reappear in bulk. Since alcohol promotes addiction it should be avoided.
Alcoholics have successfully recovered from the habit by medical treatment, psychological counselling and prayerful participation in retreats and meditation. But many have returned to alcoholism when they 'celebrate' their victory in the company of their former 'companions'! Hence former contacts and tempting situations should be avoided after anti-addiction treatment. Seeking God's grace to withstand temptations, many have left this sinful habit and led a successful life.
Drunkards will not possess God's Kingdom {1 Corinthians 6:10, Galatians 5:19-21}. It is stupid to get drunk {Proverbs 20:1, 23:20, 23:29-35}. Wine has been the ruin of many {Sirach 31:25-31}. 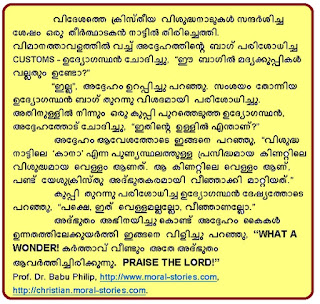 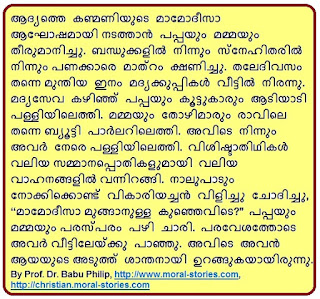 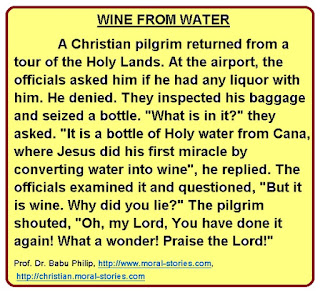