The Trojan horse in Greek mythology is a huge, hollow, wooden statue of a horse in which the Greek warriors (Odysseus, Menelaus etc.) hid and gained entrance into  destroyed it and won the war. The Trojan War lasted ten years and was initiated by the abduction of the beautiful Greek (Spartan) queen, Helen, by Paris, the prince of . The gifted Greek carpenter Epeius built the huge hollow horse with a hidden door. The armed Greek warriors secretly entered and hid in the empty belly of the statue and the rest of the army pretended to leave , as if abandoning the siege and war. Sinon, a Greek spy stayed behind. He convinced the Trojans that the Greeks had withdrawn, abandoning the statue, which was built as an offering to goddess Athena. Believing his words, the Trojans jubilantly dragged the statue into their city as a war trophy. They had to break a part of the fort to carry the huge statue in. They celebrated their apparent victory. At night, when the Trojans were asleep, the armed Greek warriors sneaked out of the horse’s belly and opened the city gates. The Greek army returned in the ships as planned and entered the city, killed the Trojan king, Priam, destroyed the army, burned the buildings and captured the women as prisoners. Helen was returned to her husband, Menelaus.

The evil Devil uses the same trick to gain entry into our homes and hearts. He uses evil temptations as apparently attractive Trojan horses such as sinful scenes in films, television and Internet, immoral information through books and CD and unholy messages through mobile phones. These appliances and media may have educational, entertaining and enlightening contributions but if their use is not restricted intelligently, Satan may sneak in through them and destroy us emotionally, morally and spiritually.
St. Peter warns us, “Be alert, be on the watch! Your enemy, the Devil, roams round like a roaring lion, looking for someone to devour. Be firm in your faith and resist him, because you know that your fellow-believers in all the world are going through the same kind of sufferings” {1 Peter 5: 8, 9}. 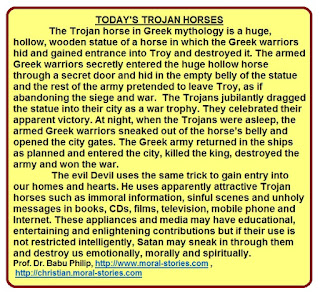