This incident occurred in a school in Porbundar in Gujarat state of India long before the independence of India. It was the day of inspection in the school. Every student came in the best uniform. The inspector entered the class and all the students stood up as a mark of respect. The teacher was teaching English. The inspector announced that he would conduct a dictation to test their knowledge of spelling. He announced words one after another and the students were to write the words in their book. When the word, ‘kettle’ was announced, a boy was worried as he could not remember its spelling correctly. Noting his worry, the teacher gave a sign that the student may look into the answer book of another student and copy the spelling correctly. But the boy was not willing to commit the crime. He was determined not to do any dishonest action even if it would give a material gain. The inspector saw the error in the boy’s answer and ridiculed him. His class-mates also made fun of him. But the boy was stern and firm.

That principled boy remained honest and truthful throughout his life. He was the great Mohandas Karamchand Gandhi, who led India to independence. Indians call him ‘Gandhiji’ respectfully and honour him as the ‘Father of the Nation.’
A story about the honesty and truthfulness of George Washington, the first president of the United States of America, is very popular. When he was a boy, his father, Augustine Washington presented him with a small hatchet (axe). The boy loved the gift. One day he used the hatchet to cut down a young cherry tree which his father was carefully growing in his garden. The father was very sad to see the scene and asked the boy about it. George confessed his actions to his father and begged his pardon. His father kindly forgave him and praised him for being so honest.
Stealing of another person’s original idea or writing, and expressing it as one’s own work is a sin called ‘plagiarism’. A plagiarist copies articles from books or web-sites and publishes them in his books or web-sites as if it is his own. This is a sin against three of God’s Commandments. It is a case of theft and making false impression of ownership arising out of a desire to own another person’s property. It is a general rule that when quoting from another author's original contributions, due reference and recognition should be given to the original author and his permission received for reproducing the work.
“Lying is an ugly blot on a person’s character” {Sirach 20:24}.
“Honest people will lead a full, happy life” {Proverbs 28:20}. 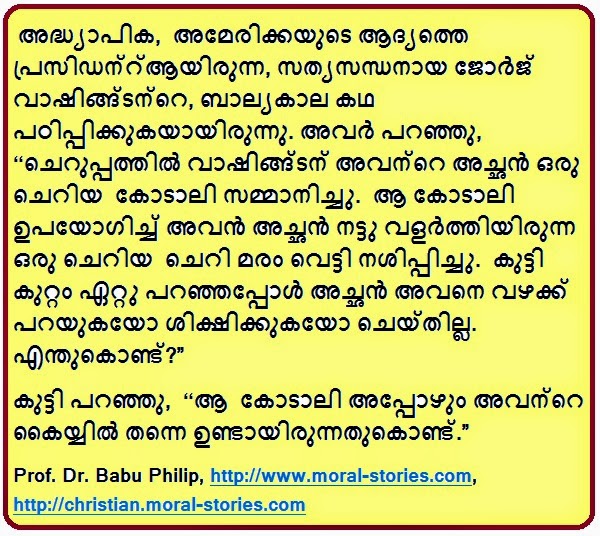